DataStation lets you query over 20 SQL and non-SQL data systems. 14+ databases can be tested locally (in Docker; even SQL Server and Oracle!).

I'm going to focus on the data systems that can be tested locally in Docker. 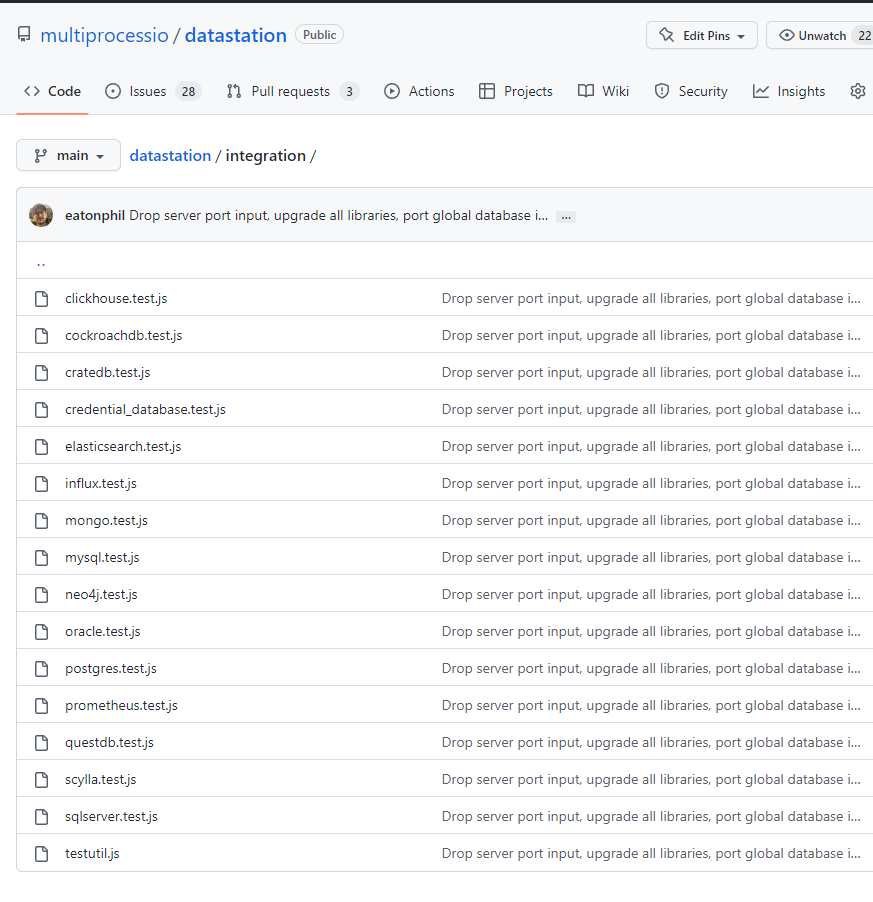 Every database, everywhere at once

When I first started integration testing databases in DataStation I did one of two things:

One of these two steps happened for each database that needed to be tested. The process ran as part of a setup script.

For example, here are the parts of the setup script for Github Actions that set up MySQL and PostgreSQL. (This is an old commit, it's no longer done like this. As you'll see further on.)

And here is later on in the same script where Docker containers for QuestDB, Elasticsearch, and Prometheus are set up to run in the background.

This was the easy, lazy way to get tests working. But there were two big problems. First off, it was horrible to test these databases locally. When working on tests, you'd have to leave the test file and go into this CI setup script and find the lines that set a database up. If you were trying to test outside of Ubuntu and needed to run one of these databases set up using Ubuntu packages you'd have to figure out how to translate those steps to your OS/distro.

So I decided to solve both problems at once by writing a small helper function, withDocker, that each test could call and declare the container setup it needed for its tests to work. The goal here was that 1) all of these local database tests would now only require Docker and 2) each database would only run so long as it was needed. No more 14 databases running at the same time in Github Actions.

Here's an example (source code here) of the useDocker helper for running a ScyllaDB container, setting the stage for DataStation tests to run for Scylla integration.

One really useful part of withDocker is that when you specify cmds it will re-run the first element in the list until it succeeds. This is an easy shorthand for waiting for the container to become available so long as you know the command should succeed in normal conditions.

Also, all commands in the cmds list get run within the Docker container with by prefixing the command with docker exec $containerId.

When you need to wait on something outside of the container you can fill out the optional wait callback. Here's an example (source code here) of using the wait callback to make sure that data has been ingested into Elasticsearch before allowing tests to run.

Using cmds or wait lets me almost fully avoid using sleep() as the sole way for deciding when tests can be run. But out of laziness, there are some exceptions. For example I haven't yet figured out a CLI or curl based way to test for when Oracle is ready so I just await new Promise(r => setTimeout(r, 60_000)); i.e. wait one minute.

You can find the full code on a Github Gist here. It's not perfect and I don't want to maintain it for others. But it might be a useful base for others that are interested in similar style testing.

Impact and next steps

Before this, in the last few weeks after we added the 14th running database, tests were hanging in Github Actions after 45-ish minutes. Now tests are finishing reliably in under 30 minutes (10 minutes goes to setup).

One shortcut I took in the withDocker implementation is putting a hack-y lock in JavaScript on a single image running at a time. And I made this behavior stronger by requiring jest to run one test at a time with --runInBand; not scheduling tests onto worker processes. This was to block tests from failing because a port was in use.

This may be slowing down tests but it may also be possible that multiple containers running at once would cause less work to be done in the shared compute environment that is free Github Actions. I'm not sure.

The way I'm thinking about trying without locks is by having the withDocker function pick a free port and sending it to the callback. Then it could schedule all tests at once without port conflicts. And then without jest's --runInBand flag in place jest could share work across a few processes. I'll have to try it out to see if it improves overall test runtime.

Here's a new blog post on how integration testing 14+ databases has evolved in DataStation.

From running 14 databases in Github Actions all at once

To building a `withDocker()` helper in Node.js so each jest test can schedule its own containerhttps://t.co/p1WqJQeq8F pic.twitter.com/7YBq2VBjWW