JavaScript developers use transformers and bundlers to simplify building large JavaScript applications and to make it possible to use modern JavaScript language features that aren't yet universally supported across JavaScript runtimes. Transformers need to parse and translate JavaScript (and/or TypeScript). Bundlers typically use a transformer under the hood and handle turning multiple JavaScript source files into one JavaScript file (a bundle). Some newer transformers like esbuild and swc work as bundlers too.

All code for the React project generator and for the benchmarks themselves are available on Github.

Babel was started in 2014 by Sebastian Mackenzie while he was a senior in high school. He has since gone on to author the npm alternative, yarn, and is working on a new transformer called Rome. Babel is written in JavaScript and has a hand-written parser (as opposed to using a parser generator like yacc or bison). It is sponsored by by many commercial groups.

Its focus has never been particularly on speed but being the largest, oldest, and most mature pure-JavaScript transformer, nobody ever got fired for using it.

Babel doesn't support JSX out of the box so we need to add @babel/preset-react in babel.config.json:

To run the project we just pass the directory to babel:

Caveat: this setting does not output commonjs modules like every other system does. But given how slowly Babel performs I figured I'd give it a pass on this one point because it meant another preset and performance could only get worse if I ask it for another transformation.

TypeScript is a typed superset of JavaScript by Microsoft. It was made public in 2012 and developed primarily by Anders Hejlsberg, who created Turbo Pascal, led the development of Delphi, and then led the development of C#. (You'd think someone like that might be more of a figurehead or management type at this point; no judgement either way of course. But he's still the top contributor to TypeScript by a large margin.)

For tsc we need to set --allowJs, pass --rootDir $dir so that it retains the directory structure of the input project, and pass it all .jsx files in the project:

This was relatively one of the more annoying set of flags to figure out. The yarn tsc --help doesn't even include --rootDir as an option. Without it all output files get put in the same flat output directory, disrespecting input directory structure.

SWC was released in 2019 by Kang Dong Yoon. Its development is sponsored by Vercel (creators of Next.js), among others, where Dong Yoon now works. SWC is written in Rust and the parser is hand-written.

Given how recent SWC came out, it also surprisingly didn't work without some basic configuration. You need to tell it you're compiling JavaScript and that JSX is enabled and that the output should be commonjs (e.g. module.exports, require('moduleX')).

Then to run we just pass it all files to compile and the output directory.

esbuild was released in 2020 by Evan Wallace, the founder of Figma. esbuild is written in Go and it has a hand-written parser. There's a good post on why esbuild is fast here.

esbuild is by far my favorite among these because it requires no configuration or tricky flags. We just pass it the list of files to compile and the output directory.

Rome and Bun look promising. But Rome is only a linter at the moment and being rewritten; and Bun isn't public yet. In the future when they become available I'll add them to this repo.

Is there another transformer I'm missing? Let me know and I'll add it. Keep in mind that projects like webpack and parcel are not transformers themselves and use swc or babel under the hood.

The esbuild site benchmarks esbuild against webpack and parcel (both use babel under the hood as the transformer) on the three.js project. Using a real-world project like this makes a lot of sense. But it can be difficult and time-consuming to set up real-world projects on multiple bundlers/transformers. So I took the approach of writing a React project generator using Faker.js.

I wrote react-benchmark-generator to generate files with React components that render random JSX and can reference other generated files/components. But there are major caveats to call out though about this generator at the moment.

First, it generates extremely simple render-only React components. It doesn't generate code that does API calls or React.useEffect. So if there were edge-cases in parsers that only show up in gigantic operator expressions or heavily nested callbacks, we wouldn't be expressing those cases in using this generator.

Second, it doesn't really generate TypeScript. Since the components are render-only I could just rename the files to .tsx instead of .jsx and I may choose to do that. But it's my guess that expressing the TypeScript paths of these four transformers won't be significantly different from the pure-JavaScript paths.

Sizes and Number of Samples

Inside the benchmark repo, prepare.sh calls the generator with arguments to generate 5 projects of three different sizes.

And just to demonstrate the basic structure within a sample project:

I am running these benchmarks on a dedicated bare metal instance, OVH Rise-1.

None of the results for any transformer should be cached. This may be more aggressive than in your configuration since some transformers can do caching.

After you've run ./prepare.sh you can run ./run.sh to run all tests for all transformers on all sizes and samples. It emits a CSV. I do ./run.sh | tee results.csv so it is saved to a CSV and I can follow the progress.

Running everything takes a while. Do the above in tmux/screen and go watch Spiderverse.

Once the runs are done we can import the results CSV into SQLite for easy analysis.

Loading the above results into DataStation we can get some nice graphs. Time is in seconds. 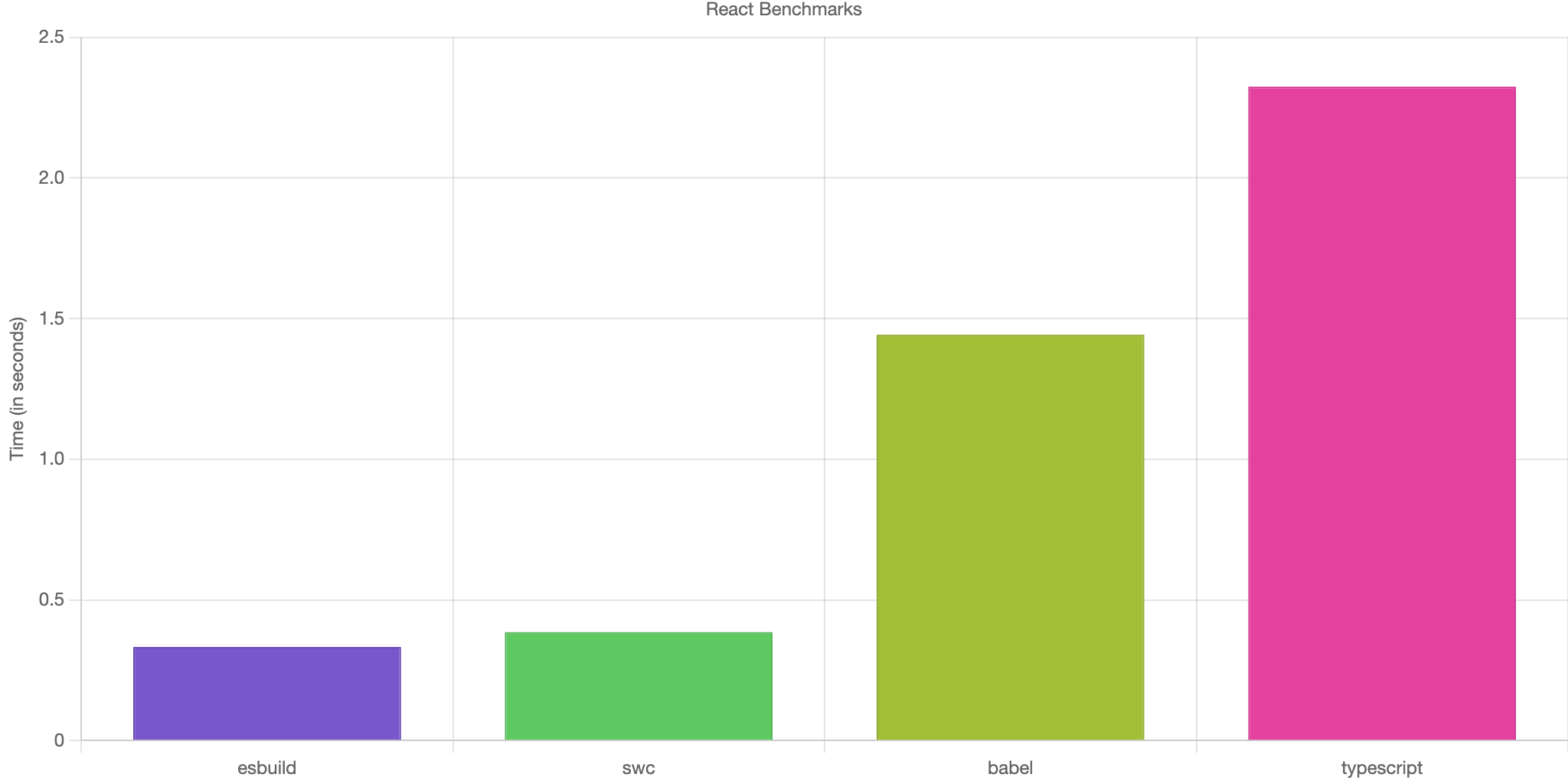 esbuild seems to do best in all cases, followed by swc. Babel seems to have lower overhead on small projects but TypeScript scales better than babel as the project size grows.

Babel and TypeScript both seem to do more source code validation than esbuild or swc does. In one version of the project generator I was generating components with duplicate names and babel blew up while esbuild just kept on transforming. Similarly, TypeScript type-checking cannot be turned off at the moment which certainly adds overhead that esbuild and swc don't deal with.

No benchmarks are perfect and being completely representative is not a goal of this post. And of course performance isn't the only reason to pick one of these projects. SWC's error messages need some love; add an extra comma in .swcrc and it blows up without any indiciation where the problem is. Or maybe you embed CSS in a way esbuild doesn't support. And I've had a really hard time sticking with esbuild for unit tests and had to switch to ts-jest which uses TypeScript's tsc.

Good luck with whatever you pick!

Ever been curious about the performance of newer JavaScript transformation tools like esbuild and swc compared to babel and TypeScript?

esbuild and swc lead the pack by a large margin.https://t.co/cnNci3OwIq pic.twitter.com/6BmVFK1cAk

Questions? Feedback? Feel free to reach the author at phil@multiprocess.io.